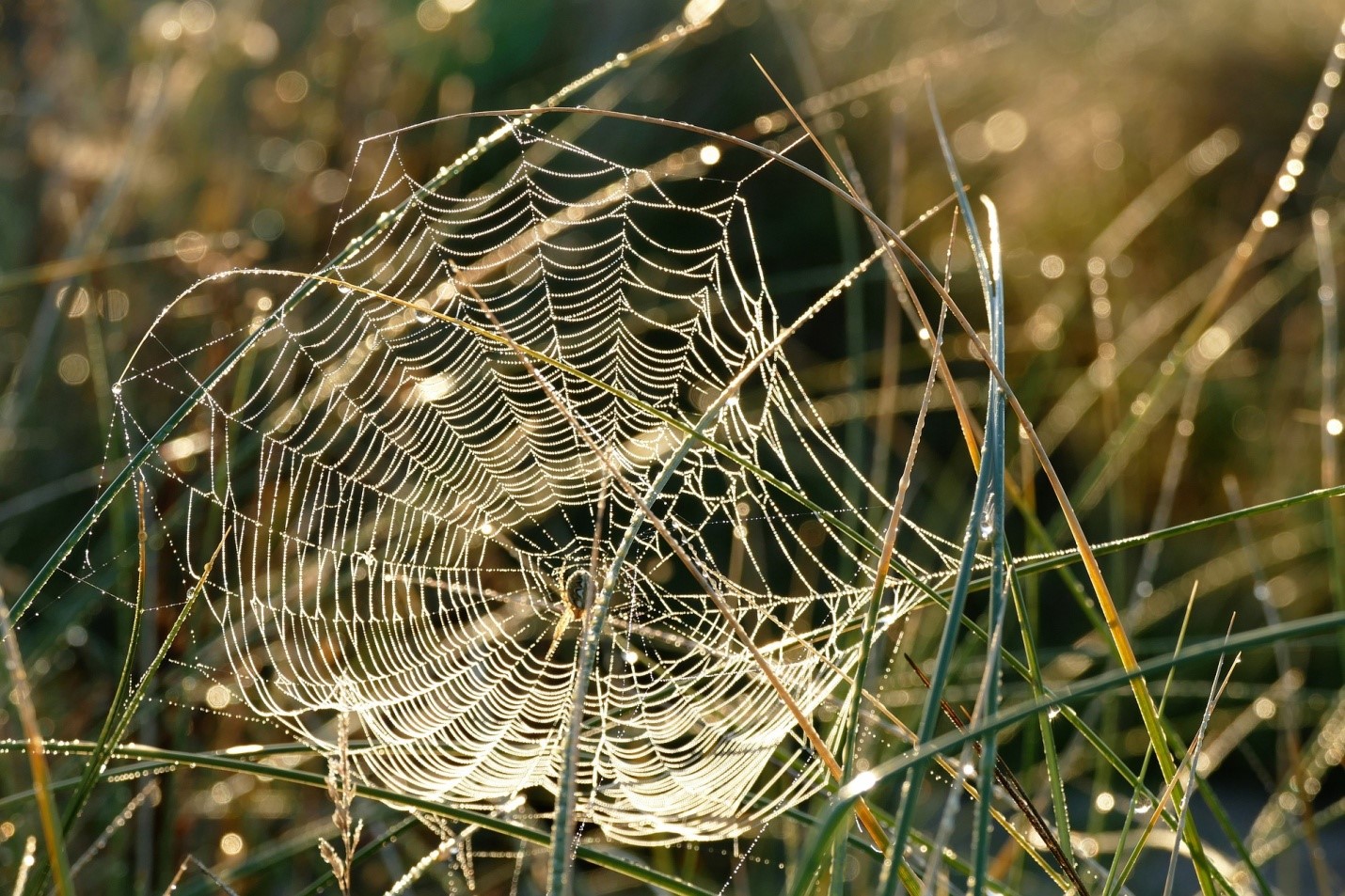 I always know it’s going to be interesting when discomfort shows up in my life because that’s where a divine lesson resides, but I had no idea the divine lesson that the spider came to teach me recently. It was a good one.

I had just arrived for a week’s vacation at a beautiful little cottage near the ocean in Alabama. We choose to stay in an Airbnb rental so we could have a more quiet space than the hotels or condos on the beach. I also love houses that have some character too. So naturally, I was delighted to discover that the Universe had guided us to this lovely little beachy cottage on a quiet street that was located just across the street from the water and it was loaded with special little touches and lots of character.

But My Bed is Broken

I was so happy to climb into comfy bed after a long day’s drive knowing that it would be an awesome week of both divine guidance and some much needed rest too. Although the bed appeared to be very beautiful and comfortable upon my initial impression, I had a very restless night’s sleep with no dreams because it felt like the mattress was sinking in the center and I kept trying to roll away from the center all night long but each time I woke up there I was again drawn into the ‘sink hole.’ Let’s just say that I woke up the next day with a sore back and more exhausted than the day before.
Question from the Universe to me: What does a broken bed mean to you?
Answer: I don’t know but there are more beds in this house so I’m going to sleep in a different bed tonight. Problem solved.
Universe: That’s your choice.

But The Toilet is Leaking

I really should have known something was up when the toilet in the master bathroom wouldn’t stop running after the first day there. Water represents emotions to me so I could sense that something emotional was really stirring but I didn’t know what and I’ve learned that all things show up on the divine schedule so whatever it will be, it will be. After a few minutes exploring my options with a DIY approach to repairing the toilet myself, I just surrendered and shut off the water to the toilet instead and said to myself, “I guess I can live with this toilet as is until we leave and then I will let the owner know that they need to fix it before the next guest arrives.” So imagine my surprise when the owner sent me a message the next day saying she needed to stop by to look for a water leak because she just received a water bill that was unusually high.
Question from the Universe: What does the broken toilet mean to you?
Answer: Something to do with emotions coming to the surface.
Question: What do you want to do about that?
Answer: Nothing at the moment. I can use the toilet in the other bathroom and the Owner can fix it after I leave.
Universe: That’s your choice.

And Then The Spider Shows Up

Okay, so apparently my lack of interest in my divine lesson resulted in the Universe sending me a spider next. In my state of total exhaustion, I found the most comfortable place to sleep was the outdoor sofa on the cute little screened in porch. There I slept the next morning away while my husband was off enjoying a round a golf and woke up feeling very relaxed and restored for the first time in a long time. Although the porch was screened in, I still noticed the occasional mosquito or spider around me but I chose to ignore them rather than kill them. So the following day I was quite surprised to see a small bug bite on the inside of my forearm surrounded by a bruise. I had never experienced a bug bite before in my 55 years on this Earth that resulted in a bruise so I was clearly confused and knew the Universe was speaking again. When I showed my arm to my husband, he nonchalantly stated that it was a spider bite.
Question from the Universe: What does the spider mean to you?
Answer: Well holy crap you have my attention now. I have a bruise on my arm and I didn’t even see the spider or feel the spider bite me.
Question: What does the spider mean to you?
Answer: The spider weaves a beautiful web that connects all things together here on Earth. I’m not afraid of spiders. I love spiders. Why did it bite me and more importantly why did it leave a bruise?
Question: Why do you think it bit you?
Answer: I don’t know but that’s never happened to me before.
Universe: Remember the beauty and gifts of the spider. You are connected to everything and everyone here on Earth. What you say and do affects everything and everyone. Sometimes your words can bruise. Sometimes a divine lesson can hurt a little bit too. It’s all okay. Just be more aware of this.

BAM! There it is! My Divine Lesson

After the first couple of days of discomfort on my vacation, everything seemed to settle down until it was time to leave and I enjoyed the remainder of my stay soaking up the beauty of the sunshine, sand and water. It felt like good medicine for my soul. But I had this nagging feeling that I didn’t fully understand the messages of the broken bed, or the broken toilet or the spider bite from this trip. That is until we were on our way home and the Owner sent me a nasty message that WE had broken the bed and she intended to charge me for it after she got an estimate to repair it. Instantly I felt highly insulted and triggered by her tone and manner and the accusation itself. My back was so sore from trying to find a comfortable place to sleep that we actually decided to check out a day early so we could sleep in our own bed. And now THIS? Really Universe??? What the heck is going on? Just as I was feeling drawn into the fight and ready to respond to her nastygram with a strong dose of my own human defensiveness with something like “I will dispute any charges on my credit card for this because the bed was clearly broken before we arrived” I felt my Divine team step forward and say “Pause. Don’t send that.”
Me: What would you have me to do? Pay for something I didn’t do?
Universe: No. You can say that you believe the bed was broken before you arrived. Did you notice the bed frame was similar to the one your parent’s had when you were a child?
Me: Yes.
Universe: Do you remember that sometimes the support boards broke on that bed frame from normal wear and tear?
Me: Yes.
Universe: Are you sure the bed was broken before you arrived and not just the result of wear and tear from the prior tenant or perhaps from you?
Me: I really believe the bed was broken, just like the toilet, before we arrived.
Universe: So say that instead.
Me: Okay.
Then I sent a softer and toned down response to the Owner as follows, “I assure you it was that way upon our arrival or we would have slept in that bed. We both have sore backs now.” And again I felt the sting in her words when she instantly retorted, “I don’t understand why you would not have said anything. You say it was clearly broken yet you don’t mention anything and the bed has been slept in. I can’t prove you did it so I won’t charge you but I don’t believe it was that way.” Ouch! Ouch! Ouch! More bruises in those words…” I don’t understand…I can’t prove…I don’t believe…” How many times have I used those same words? As I sat there stunned over this exchange, I looked down and again noticed the spider bite and bruise on my forearm.
Universe: Remember the beauty of the spider. You are all connected. What you say and do affects everything and everybody. Let it go, live your life with joy.
Me: I understand but those words are still hurtful. I feel wounded by her tone and manner.
Universe: It’s okay to feel that way. Pause and carefully consider your words when you feel like that. Just because you feel wounded doesn’t require you to return the favor. That’s your choice. That’s your divine lesson. You stayed peaceful and used words that spoke your truth but didn’t harm others. Good job. You did well my Child.
Me: It wasn’t easy. I wanted to go to that fight with her.
Universe: Your spiritual work is never going to be easy but it will always be worth it, of this you can be certain. Now sleep well and remember the power of your words. You have the choice to bruise like the spider or lift like an Angel. Slow down and choose well.
Me: Memo received. Thank you Universe. Thank you spider. Thank you broken bed. Thank you leaking toilet. Thank you property owner. Thank you Angels. Thank you Todd. By the way, I think I love spiders even more now. That was a good divine lesson for sure!